Satsang – Yoga in its earliest tradition

To mark every season, the Classical Yoga community have satsang.

Satsang is where we get together and have fun! 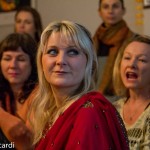 Well, we share a light dinner first. Then we chant, meditate, Mataji leads a talk, we chant some more, and then we have  supper. And mix and mingle.

it is also the earliest way that Yoga was taught – a teacher/guru sitting with a group of “seekers” – people who seek understanding of the big issues of self and being. Yoga is the archetype of that sort of enquiry.

Anciently, some people left urban society in the land that became India, because it was under the grip of priestly control in every part of life.  These rebels went off to the forest, to contemplate in solitude. 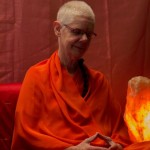 What were they rebelling against? Against being controlled?  Perhaps not.  Perhaps their motive was a much more real interest in spiritual life than the priestly ideas of rules and rewards could ever satisfy, Perhaps, somewhat like Meister Eckhart, they found that a set of rules and fixed beliefs “would not satisfy the spirituality of a fly”. So they went to the forest. Their solitary contemplations took them to a deeper space, a more satisfying spirituality, a sense of the wholeness of reality, the pervasiveness of Consciousness.

As word filtered out from the forests, some, still  living in urban society, sought them out, sat under the trees with them.

And so began the great work of exploration and discovery: of what “self” truly is, of what the difference is between being alive without awareness, and Being; of what Consciousness is when it is not cluttered with thoughts and opinions; how thoughts and opinions become mistaken for an experience of reality…. 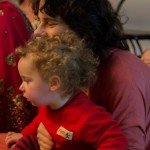 So at Satsang, we allow ourselves an hour or two for such exploration.  Rather than sit under a tree in the forest, we sit in a comfortable room permeated by the sweet aroma of chai; rather than deep seriousness, we do serious work with lightness and humour; and we enjoy ourselves while we are at it.

We have Satsang to mark the seasons of the year 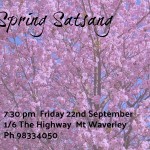 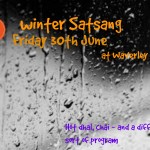 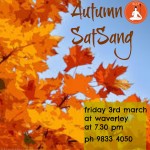