Do you try to make sure people  understand you?  Waste of time!  After you have said your bit as best you can, take as a given that your hearers will filter your communication through their own preconceptions. For your listeners, “you” are their creation and your input into it is quite limited. You can’t change that.

ACCY posted this little quote box on Facebook – they are quoting me, and yet I am always surprised and amused by what gets put up – 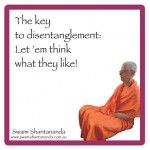 but I must say this is one of my favourites. Getting off concern for what people think about you, what you do, what other people do, is a wonderful release. It is indeed the key to  disentanglement and dis-ensnarement. It’s the close cousin of enlightenment.

Thoughts are not who you are

But when you get yourself caught in the snare of feeling defined by what other people think, you get pulled into a relentless game of proving something, defending something – throwing empowerment into the other’s thoughts.

Two ways to do it

One way to practice letting “em think what they like is with an antisocial delusion of immunity, reinforcing the ego and its self-importance, you against the world. The other is with good-will even towards those who don’t have good-will for you. The first is a quick route to misery for self and others. The second liberates you to be truthful – no pretending that a lie is not a lie, that a fantasy is not a fantasy, that a manipulation is not a manipulation.  In fact,  you become resilient and assertive. The upside is that you will not play into people’s games and manipulative ploys any more, because you see them for what they are.  Truthful and assertive individuals will be great company.  And you will be truthful to  yourself and about yourself.

The downside is that some individuals won’t like you one bit.  But does that matter? Those are the ones still bargaining for relationship. And if you have to pretend in order to keep a relationship – you haven’t got one!!!

Don’t just agree with it, be it

Being it means not just facing down the discomfort from realising others would like you to contort yourself to fit into their fantasy.  It means really, really being ok with yourself – and also with the other’s difference from you. It requires an unconditional tolerance, even if it is not reciprocated. To hold others in your love is the way of enlightenment. You have to be really ok with the fact that others are different from you, and their difference is ok. BUT….

All things being equal….? Never!

But here’s the rub. Tolerance does not mean acting as though everything is equal. A lie is a lie is a lie, it’s a  manipulative ploy. Fantasy and delusion are refusal to engage with the real. Intelligent is not equal to irrational and dumb. Hypocrisy is not equal to plainspeak. Compassion speaks louder in action than in words.  It is absolutely fine to call those things when they affect you or your society.

Neither aggressive nor spineless

There is a huge difference between inner calm which persists through all the ups and downs of life, and being passive, spineless, mistaking spirituality for a moral vacuum. And yogis should know the difference. There is no shakti in a frontal lobotomy.

I have been practising still-mind meditation since 1982, teaching still-mind meditation since 1989, and training teachers since 1999. The greatest life change for me has been a steady easefulness with its ups and downs, and an ability to love the difficult folks as well as the easy ones. The more profound changes aren't so easy to put into words.
View all posts by Mataji →
This entry was posted in Behaviours and Relationships - the Yogic Way, Reality-Based Spirituality and tagged article, Australian College of Classical Yoga, mistaking thought for reality. Bookmark the permalink.