A Night in Hospital 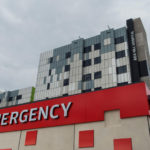 Feeling ill after a week of wildly fluctuating pulse rates… weak, cold, poor concentration,  feeling so unwell… loved ones insisted on taking me to Emergency Department (ED) at the local hospital.  Me expecting to have to wait at least four hours.  But no… triage put me straight into care. And to my astonishment, kept me overnight.  So … my night progressed with being “plugged in” to monitors and automatically timed blood pressure machines squeezing my arm, and an IV catheter (which was never used) plugged into my other arm, right in the curve of my elbow.  It was quite sore by the morning. And so many questions, constant questioning!  And odd experiences….

I mentioned on the way to the ED cubicle that I had recently turned 70, and look what had happened already… and the nurse said with no apparent artifice, “Well, you look fantastic”….

…the attending doctors – residents under supervision –  were all young women starting their careers… nice to see.  Professional staff now all seem to introduce themselves to patients, and use their first name.  I am sure it comforts patients. I offered to call the first doctor, Dr Kerryn… but she said she didn’t like being called Dr….

… feeling the need to go to the toilet… being told that as I was “plugged in”, they did not want me moving,  so it would be with a bed pan… ugh, might hold on a bit longer….

…down to Radiology for an X-ray of my heart. No walking for me!   A young Indian orderly with a beard, gangster moustache and close cropped hair came to roll my trolley down the corridor.  He was very surprised at my name (legally  Swami Shantananda – the Australian government can only handle prefixes like Dr, Mr, Mrs, and Ms, no Swami – so Swami becomes first name, Shantananda last name) and asked me did I have any association with India.  Hahaha. He was a Sikh.  I guess his family decided that the old Sikh gurus would not be offended by a gesture towards assimilation. He had his hair cut very short rather than never cut. It certainly suited him….

…realising at X-ray that I was not plugged in at all, and that there was bound to be a toilet in the vicinity… aha!

When I get back to ED, my nurse remembers my plight…I reject her offer…tell her how I had managed… she says, “Cheeky bugger”.  Curious how formal, professional, personal and informal all mix at the one time.

I nearly fell off the trolley when they said they would keep me all night, and once more, the peculiar view one gets from being in a moving bed, as my trolley rolled down to the Short Stay Unit. Not a formal admittance, you recognise.  Getting on towards 10.00 by now… it was a long time since lunch, and food was not in the plan.

Those trolleys are remarkably comfortable.  The bed in the Short Stay Unit was another trolley, and I think they would have slid me from one to the other… but I was having none of that, and jumped off the first trolley, walked over and climbed onto the other.  Not sure if my hospital gown flapped open or not.

Not admitted but sleeping over….

The night nurse ran the Short Stay Unit with tough efficiency, and she had anything but the appearance of the angel that she was.  All the beds were separated only by curtains. I heard her padding around attending to and comforting her little swag of patients.  She made me a cup of tea… such a blessing!… but also had me shift on to my back for the blood pressure reading when I had just made myself reasonably comfy on my side.

It was much quieter in the SSU than in the ED, and I fell asleep some time about midnight. I had the strangest dream.

Dave Brubeck’s “Take 5” was playing perfectly in my head (why?) and for visuals, my dream had “Dave Brubeck’s daughter” playing championship ping-pong in a sunny outdoor setting,  against 5 opponents all at once. If Brubeck even had a daughter, she would have to be about my age.  The dream daughter, however, was young and sporty, and a true champion, despatching her five opponents with no trouble. As each one was vanquished she called with a grin, “One”…. “Two”, etc, to the rhythm of her father’s famous tune, which was playing loudly throughout.

Well, sleep and dreaming only lasted till 3.00 am when Angel Sergeant Night Nurse came and took my blood pressure again. Of course the monitor plugs and their cords attached to twelve electrodes sticking on my flesh, and the IV catheter in the crook of my arm, and the pulse clip on one finger, remained throughout.

Around 7.00,  I dozed off again, until awoken at 8ish by Jackie, who introduced herself to me as the duty nurse at the exchange of shifts.

Jackie must have seen that I was a swami, because she asked me what sort of meditation I did.

“Still-mind meditation ,“  I said. “Consciousness without cognition.    Consider this: thinking requires consciousness, but thinking does not create consciousness.  If you look back over your life, you will find that there already have been moments of consciousness where there was no thinking happening. Consciousness does not require thinking, it is always there.“

Looking interested, she told me that she practised TM.

“Yes,” I said, “that’s the same tradition.  You have to let go of the mantra, you know.  When it all feels arduous and heavy, and you realize you can just slip into stillness, then let it go.”

“Because you don’t need it any more?” 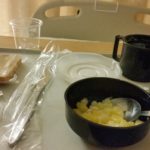 Perhaps she took that away to consider, I don’t know. She pointed out that breakfast had been placed on my bed-table.  Porridge and lukewarm tea never tasted so good.

About three hours later, upon discharge, it began to settle in… Sudden Onset Atrial Fibrillation… I was now an old woman taking heart medication, like so many others that I had looked on with scorn when I was a younger woman.

Even so, I am the light of consciousness, which is What Is.

I have been practising still-mind meditation since 1982, teaching still-mind meditation since 1989, and training teachers since 1999. The greatest life change for me has been a steady easefulness with its ups and downs, and an ability to love the difficult folks as well as the easy ones. The more profound changes aren't so easy to put into words.
View all posts by Mataji →
This entry was posted in Article, Conversations with the Swami, Meditation, Sannyas - Being a Swami, Universal Consciousness and tagged hospital, light of consciousness. Bookmark the permalink.